House prices are falling and demand for property continues to moderate nationally. Despite the Reserve Bank of Australia yet to move on rates, the banks continue to cut mortgage rates to maintain volumes and we should expect to see the continuation of a market slowdown. The days of low interest rates will soon be over and the Financial Services Royal Commission will likely result in further restrictions on lending. The flow of money into residential property is slowing which is going to have a big impact on prices in 2018. As ever, conditions remain highly variable across each capital city. 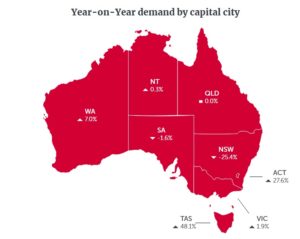 The capital city most challenged right now is Sydney, where we are seeing drops in demand like we saw in Perth at the end of the mining boom. High prices are having a big impact on buyer activity and the decline in prices is likely to continue during the first half of this year.

Further south, Hobart is experiencing the strongest increases in buyer demand on the back of a changing Tasmanian economy. This will continue to flow through to price growth in the city in 2018. With Hobart performing strongly, it’s not surprising that half of the top 10 most in-demand suburbs are located there.

While it isn’t as red hot as Hobart, Canberra is also experiencing very high demand, with apartments becoming increasingly popular compared with houses over the past 12 months. Melbourne suburbs are also in high demand, with Warrandyte in the north-east currently the most in-demand suburb in Australia. This is being driven by its offer of big homes and blocks, commuting distance to Melbourne and relative affordability.

Top 10 most in demand suburbs in Australia

Across Australia, prices have increased by 6.3% over the year. Over the past quarter, however, we have seen a significant slowdown. Sydney and Perth are experiencing the biggest declines, yet there is a very different outlook for each. Sydney is expected to see continued declines, while Perth is likely to see a sustained pickup throughout 2018 driven by demand levels which continue to increase in the city. With official employment data for Q1 2018 still to be released, we can predict that it is likely to show a stronger pickup for Perth and a slowing in Sydney. Perth is in the midst of a slow but steady recovery, having been in downfall for four long years.

The cities seeing the strongest price growth are Canberra and Hobart, supported by sustained demand for property. Melbourne has experienced a 3% downturn in prices over the past quarter. Despite this, levels of interest from buyers suggest that a downturn will be relatively short-lived and prices will rise over the course of 2018 – albeit at a slower rate to what we saw in 2017.